There are two inter-related tools used to produce a NeuroCognitive Risk Assessment (NCRA).  The first tool is a Structured Assessment of Violent Extremism(SaVE) Inventory developed by Professor Geoff Dean to assess the current risk/threat level of an individual already identified as a Person-of-Concern (PoC) by an agency and/or authority.

The second tool is a Visualised Assessment of Violent Extremism (VaVE) software program which graphically depicts the assessor’s risk ratings based on the SaVE Inventory’s risk scales in order to quantifiably evaluate the reliability of the assessor’s ‘NeuroCognitive Risk Profile’ assigned to a PoC in relation to ‘over’ or ‘under’ estimation of such risk, compared to similar cases of violent extremism.

The SaVE inventory is akin to a Structured Professional Judgment (SPJ) instrument designed around a set of cognitive indicators to capture and score specific perceptions and beliefs, held in common both within and across each of three key categories of violent extremism (ie. terrorists, militants, and active shooters [schools, workplaces, public places, and mass killings]).

For an NCRA assessment to be  deemed  ‘valid and reliable’ the assessor must be compliance approved by being ‘certified’ as properly trained and that any assessment made by them has been subjected to the quality control and assurance regime of the VaVE software application.

VaVE is a purpose-built software program developed on an open-source platform that uses SaVE inventory data on an assessed individual to produce two types of outputs –  ‘risk contour’ plot and a ‘risk surface’ plot.

A ‘risk contour’ plot is a two-dimensional grid that shows where an assessor’s has estimated the ‘Risk Level’ on a set of ‘minimal through to high’ risk contour lines for a particular PoC.

A ‘risk surface’ plot is a three-dimensional grid that depicts the relative ‘Risk Position’ of an assessor’s estimated ‘Risk Level’ for a particular PoC.  The aim of ‘risk surface’ plot is to establish the extent to which the assessor may have ‘over’ or ‘under’ estimated the particular PoC’s ‘Risk/Threat Level’ and consequent ‘NeuroCognitive Risk Profile’ in comparison with the ‘perceptions’ and ‘beliefs’ of similar validated cases (ie. cases where the outcome is known to be true) as the PoC under assessment.

The visualisation below depicts the utility of these two inter-related tools (inventory and software) for pattern recognition of specific perceptions and beliefs that define the risk potentiality of a PoC. 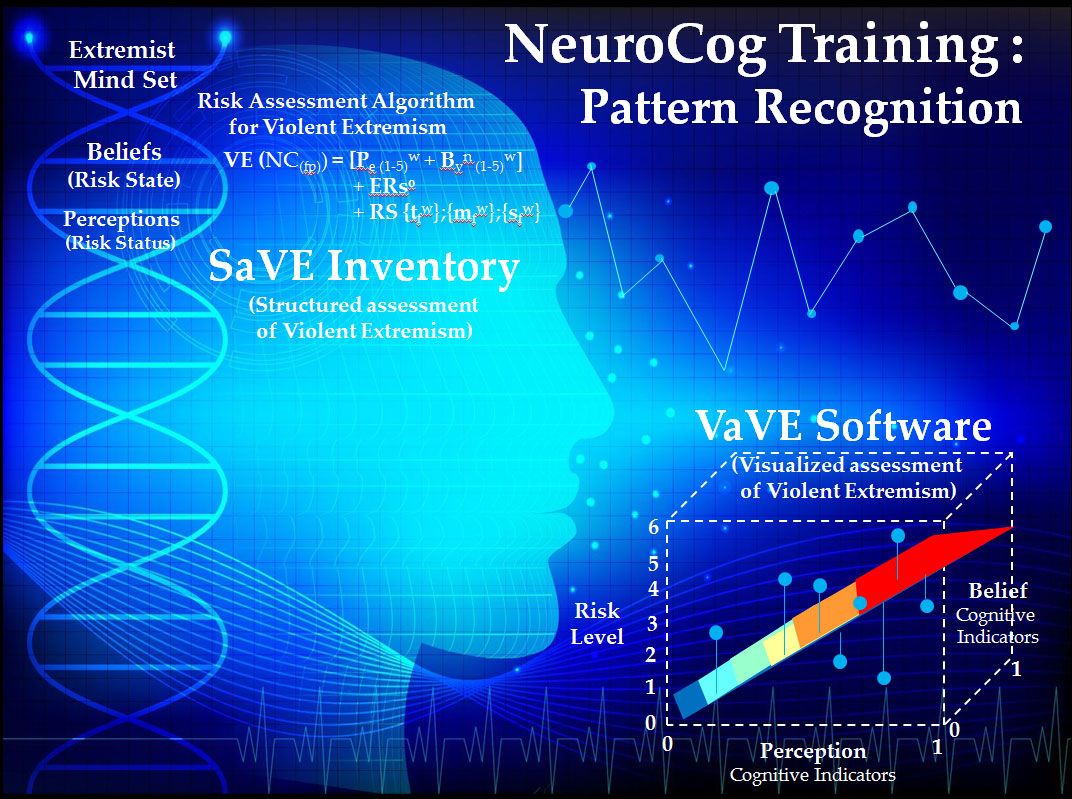 In summary, the NCRA tools (SaVE inventory and VaVE software) are used to construct a ‘NeuroCog Risk Profile’ (NCRP) of a PoC’s likely risk potentiality of engaging in acts of violent extremism.  Earlier versions of these tools have been extensively validated through expert consensus in six countries (Dean, 2014).

We're not around right now. But you can send us an email and we'll get back to you, asap.